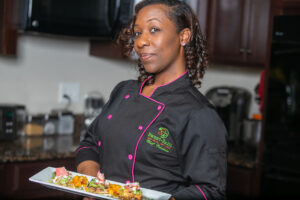 Karida Celestine is the Executive Chef and Founder behind the essence of Sweet Bazil. She was born and raised in Prince George’s County Maryland, but her passion for the restaurant industry has afforded her opportunities around the globe. Chef Celestine began her culinary career by earning a Bachelors Degree in Culinary Arts from Drexel University. She went on to further hone her skills, studying international cuisines while abroad in London and Paris. Upon returning home, she spent 3 months training in the kitchen with Master Chef George Perrier at five-star dining establishment, Le Bec Fin in Philadelphia. She attributes her undying commitments to professionalism and high quality standards to the rigorous training she completed in these early days of her career.

Chef Celestine continued to seek out new challenges and landed her first Executive Chef position at B. Smith’s restaurant in Washington, DC. This type of high-pressure environment with strict requirements would prove to refine Chef Celestine’s already-exceptional principles of service. While working in this capacity, she was able to prepare creations for hosts of high-profile individuals with very specific dietary concerns. She prepared meals for many visiting celebrities, has traveled to facilitate exclusive events, and has prepared and served meals to former Presidents. In fact, Chef Celestine has even had the distinct pleasure of catering meals at the White House on several occasions.

Always searching for ways to expand her knowledge, practically and professionally, Chef Celestine accepted a position as a General Manager at a restaurant in the National Harbor. The duties that accompanied this position allowed her to experience firsthand how each department contributes to the success of the restaurant as a whole. In this role, she was able to oversee and ensure every aspect of a well-run establishment. “Consistency is key” and “trust your system” are two philosophies that impact even her current roles.

The combination of these diverse experiences paved the way for Chef Celestine to venture out on her own. And in early 2014, backed by years of industry know-how, Chef Celestine officially launched Sweet Bazil. She envisioned a remarkable personal chef and catering experience that would be unique, intimate, and fun. 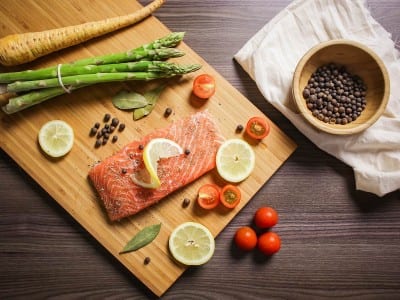 Created with a bold freshness in mind, the Sweet Bazil name grows from the same vine as the organic herbs found in our kitchens. Sweet Bazil is the seasoning that combines exceptional service and flavor. Established in August of 2014, we are a freshly baked company bronzed by years of experience. Our chefs use their combined decades of experience to ensure all events are professionally-crafted, fun, and exceed all of your needs.

We create special occasions like our Black Box Experience to shake things up. We play the small parts with a Helping Hand, or handle every detail of small or slightly larger affairs with Private and Catered Events. We even teach willing students exclusive tricks of the trade in our Cooking Classes. No matter the type or size of the event, Sweet Bazil can infuse a distinctive flair.

Our staff has been hand-picked by Chef Celestine and are certified industry professionals who meet or surpass her high expectations. With experience in every area of operating kitchens and restaurants, our staff knows exactly what it takes to make any event successful. Sweet Bazil would love to spice up your next event, and is currently serving the DC Metropolitan area (DMV).